Today, the weather was warm and the sound of snow and ice melting was like music to my ears.  After an extremely long and harsh winter, while out for a walk with the dog, I began to notice things that I haven’t seen in months.  I walked by someone’s house to see a Christmas tree on top of the snow. 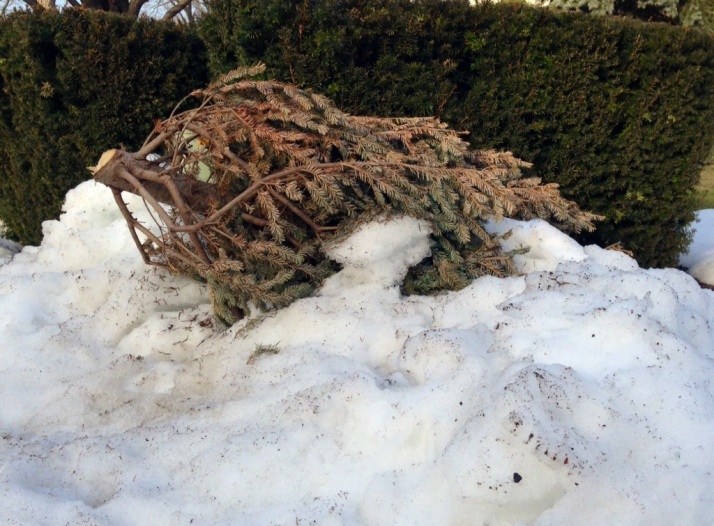 I thought it was odd that in March, someone was throwing out a Christmas tree.  I stopped and saw that it was actually embedded in the snow and the only reason I now noticed it, was because someone had attempted to dispose of it months ago, but the constant snow had other plans. It was then I realized that the Christmas holiday had been frozen in time.

A few feet down the street was a large christmas ornament on someone’s lawn.  Well, the grass is something I haven’t seen in a long time, but the Christmas ornament just made me laugh and remind me of how long we’ve been encased in snow and ice.

Then I saw some snowflake Christmas lights hanging in a tree.  Confusing… Yes, but before today, someone could not even get to the tree.

Now, at home, I have a nice fancy camera, but out on my walk with the dog, I only had my iPhone.  There’s a famous photographer that’s known for saying, the best camera you can own is the one you have with you, so I started snapping away with my phone.  A few more feet down the road I discovered snow melting slowly to reveal a plastic wrapped newspaper that looked good as new.  It could have been from yesterday, however, the date on the paper looked like it was from January.

I guess the moral of the story here is that while someone could have their own plans; to get rid of a used Christmas tree or deliver a newspaper to a paying customer, nature will always have it’s own plans and it will win.  With the changing of the seasons comes a time to reflect on what has been and what will be.